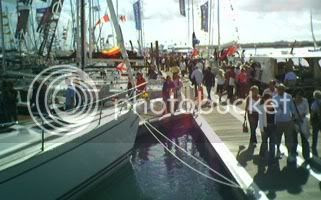 Spent today at the Southampton Boat Show with some friends. It's an absolutely massive event with every kind of vendor there is that has something to do with boats showing off their wares. The best part is going onboard all the different kinds of yachts and checking them out.

Sunseeker had a massive stand so I climbed aboard one of their baby luxuy powerboats since it had almost no line-up. It was a Predator 55 and sold for a cool £576,000. Yep, it was nice for the bottom of the range. Very comfy. Even had a small garage for a speedboat. The top of the range is around £5,000,000!

I stuck mostly to checking out 40' sailboats. It's the size I like. Not too big; not too small. Of the ones I looked at, my favourites were the Elan Impression 384 and 434 distributed by Moody. Excellent layout, comfortable, light and airy. No idea about how they perform. Base price of the 384 is £103,000. Reasonable compared to the cost of similiar size yachts.

No, I'm not about to buy a yacht but it's fun to think about it. If I was seriously going to try to do a lot of sailing, I would rather buy into a syndicate of some kind and share the expense with others.

We're finally back to a regular schedule for the rest of term. Kids are in school and all their activities and transport sorted out. K* has piano lessons, beavers, swimming and kindermusik. He's also signed up for football although I still have to check with the hospital whether that's ok with his leg still mending. R* has school play, cornet lessons and swimming. She's quit brownies because it's just too girlie and is currently deciding between either St. John's Ambulance Cadets or Sea Cadets.

Jenny started back full-time at the Tante Marie cooking school last Wednesday. It will keep her very busy until the end of November when she graduates. We celebrated her birthday yesterday at home.

So that leaves me at home mucking about with various projects and being a house hubby. I'm thinking about going back to work after we return from Christmas in Canada. TBD. Last Friday we brought home our new kitten. He's a moggy we got for free from R*'s friend. He was born on July 9th which makes him 9 weeks old.

I've always wanted a cat and with R*'s gerbils gone it seemed like an obvious next pet for the family. R* would much rather have a dog and as much as we all like dogs, neither Jenny or I want to commit to daily dog walks. Cats are just so much easier to look after. Our only concern is whether K* will turn out to be allergic to him; it may turn out that we can't keep him. (the kitten that is although it's a close call).

The kitten was, in fact, my birthday present but we couldn't pick him up until after our holidays. R*'s been hounding me about what the cat name should be all summer as I reserved the right to make the final decision. R* wanted to call him Mewcus. No, definitely not! Chairman Meow was tempting. So was Elvis Catstello. It's been very tough and looking through Kessel's 15,000+ cat names didn't make it much easier. At the moment, it's either "Bobo" or "Pixel" as it's still a topic of family discussion.

Of course you never really "own" a cat.  It's just a cohabitation arrangement for mutual benifit. 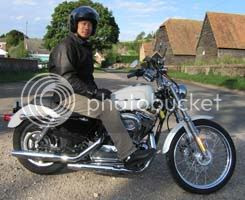 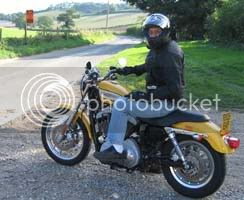 While on holiday in France, Daniel and I were looking for motorcycles to hire but we never found any. We were told by one business that new insurance changes had made the business unviable. It's too bad I hadn't discovered Ride The World before we went on holiday as they list a few companies still renting bikes there. Anyway, we managed to rent some Harley's yesterday just before Daniel headed back to Canada.

Both bikes were 1200cc Sportsters rented from Thames Valley Harley-Davidson for £69. For me, this was my first ride after getting my motorcycle license seven months ago and by far the biggest bike I had ever ridden. I was a bit nervous but at some point you just have to get out and do it.

It was a perfect warm sunny and dry day to go for a ride. We skirted around south of Oxford and rode around the Cotswolds. Fabulous open windy roads out there. By the time we headed home through the Chilterns, I was much more relaxed and enjoying the ride. My hands stopped being numb from gripping the handles so hard! Altogether we covered 185 miles.

The Harley was really easy to ride. For such a big bike, it's not at all twitchy. The power comes on smooth and slowly and just keep coming on as much as you want. No big jolt of power. It definitely prefers to rumble along at low revs. The sound is terrific as you go down narrow streets between buildings on a high street.

After a pub dinner, we rode home at night which was not fun. With oncoming cars, you're obliged to use a low beam and if there's no street lighting, it's really hard to see what the next corner is like or where the road is turning! Freaky.

We returned the bikes this morning after going for another short ride. Definitely felt good swinging around the bends on the local backroads on a crisp sunny morning. I really should get myself some proper biking gear. I wouldn't mind trying out some of their other Harley's too!

While hunting for bike rentals in the UK, I also discovered Raceways in London. They look like a great place to hire a bike for the weekend. 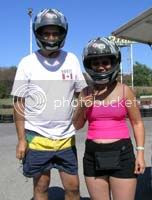 Boy it sure is nice to get home after a few weeks away! All-in-all, we had a good trip. Yes, Provence is pretty although it would be much better at the right time of year - late June/early July. Jenny loved the markets. I thought the Roman ruins were outstanding. The campsite further south near Perpignan was less than thrilling but more fun for the kids. It was less culture; more holiday suburbia.

Here's a picture of Jenny and I after racing some gokarts. It was a heap of fun. It was a first time for Jenny so she wasn't very speedy. The kids also got to try some real petrol-powered karts too but on a smaller track. One of a number of things we did.