With the kids on Easter break, we spent a day up at Bletchley Park. It's famous as the site of the Government Code and Cypher School (GCCS) during World War II. It's here that Alan Turning worked on the Bombe machine and Tommy Flowers brought the Colossus into production in their work to break German Enigma cyphers. 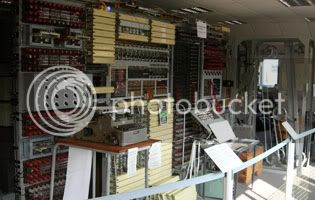 Ok, maybe not the most exciting place to take the kids but I've been wanting to visit for ages. Bletchley Park is hugely significant in both its role in winning the war and contributions made to Computer Science.

It's not a very big place and it looks like it struggles to finance itself. The most interesting display was the rebuilt working Colossus that's there and running. Those 1500 vacuum tubes put out a lot of heat! It's not the first true computer (that was the Manchester SSEM) but it was electronic, digital and semi-programmable and put to work in 1944.

Another great display at Bletchley is the hands-on computer museum with a great hodge-podge of old computers - Pet Commodore, Commodore 64, Vic 20, an orginal IBM PC, Classic Mac, etc. Fabulous! Wish I had collected some of them myself over the years. Of courses there's excellent displays on the whole Enigma story and some on life during WWII. 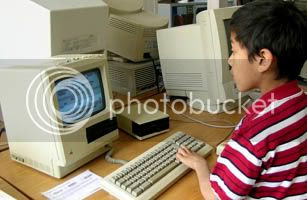 So if you're a computer geek, Bletchley Park is well worth it. If you're dragging kids along, it's not going to be a long visit. There's a free tour, free audio guides and the ticket is valid for a whole year - adults £10, kids under 12 free.

Email ThisBlogThis!Share to TwitterShare to FacebookShare to Pinterest
Labels: Out and About
Newer Posts Older Posts Home
Subscribe to: Posts (Atom)