Before flying to Japan, the kids considered China and Japan to be basically one in the same except that Japan had sushi. If they learned one thing on this trip, it’s that these two countries are vastly different.

Arriving in Osaka was a welcome relief from China. It’s so clean! It’s so orderly! People queue even to get on a subway train. In China, people don’t even let you get out of the elevator before they step in.

We caught the train to Kyoto and were thrilled to spot cherry tree’s in full blossom along the way. Our timing wasn’t so bad after all! A taxi got us to the modern ryokan that we had booked tucked away down a side street in the downtown area. It turned out to be a great location for exploring the city. 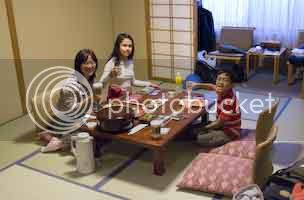 All through our visit to Japan we stayed at ryokan’s with Japanese style rooms. This first one was one of the best and was a generous 12 tatami mats in size. The staff prepared our beds each evening and put them away in the morning. Breakfast was served in the room by a motherly Japanese lady chatting away in Japanese as if we understood it. Every evening, the kids looked forward to their wash and soak in the public baths.

One fascination was the electric toilet seats. They’re heated! And they wash your bum with a spray of warm water and blow dry it too! I can’t help but wonder what the carbon cost of millions of warm toilet seats must be.

The first day of sightseeing was a washout – literally. It rained hard. We attempted to go to a museum but it was closed being a Monday. We salvaged the day by browsing the Nishiki food market and the Daimaru Department Store. The food floor in Daimaru would put Harrods to shame. We also explored the Teramachi and Shinkyogoku covered arcades. Determined to do some real sightseeing, we joined a walking tour of the Gion district in the evening despite the rain. 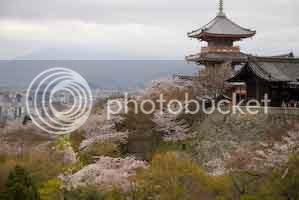 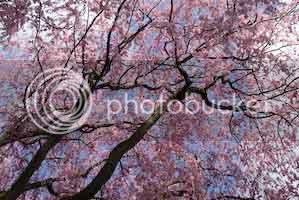 The next day was grey but at least the rain had stopped. We did the classic walking tour of Higashiyama going from Kiyomizu-dera up to Heian-jingu via Maruyama park.

The temples blur together as there’s so many to visit but the cherry blossom tree’s are simply stunning and are truly glorious when the sun breaks through and lights them up to their full radiance. The wind occasionally blew the petals into a gentle blizzard that filled the air. 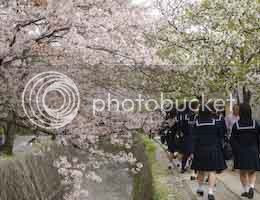 The following day, us boys visited some more temples in the northern bit of Higashiyama and walked along Tetsugaku-no-michi (Path of Philosophy) while the girls joined a long Arts & Crafts walking tour.

I regret that we didn’t plan to spend more time in Kyoto. You can certainly cover the highlights in three days but it would be very easy to spend a week or even more exploring the area. And it’s very well worth the effort going during the sakura season.

China was much as how I expected it from what reading I had done.

My biggest impression was the dreadful air pollution. I've never seen anything like it except maybe L.A. in summer. There's also the legendary booming economy that's evident around the cities. There's plenty of well off people and plenty of poor. All true.

I also found myself constantly getting stares. Now I know what it might be like to be beautiful! So I felt free to stare right back. It's a bit weird. My daughter attracted plenty of attention. Mixed marriages are very rare in China so they were very curious when they realised Jenny and I were married and our children mixed. Overall we found the Chinese people gregarious, loud and friendly. We never suffered huge hassles. Of course, we have been overcharged on occasions but there's nothing personal about it.

China faces huge challenges. Inflation is running high. The one child policy is going to have a huge impact as that generation ages. There's a huge disparity between city life and country life. The environment is facing disaster. Many laws don't get adequately enforced. I would hate to be trying to steer this juggernaut!

After mulling over our options, we decided to hire a 4x4 and driver and explore northern Sichuan rather than fly somewhere else in China.

Domestic tourism is massive in China. With growing wealth, the Chinese must be travelling more and more so all the standard tourist sites are very busy even in low season. I would hate to see these places in high season. By getting our own wheels, we hoped to get away from standard tour routes and see the countryside.

Our driver and guide was a friendly Tibetan fellow by the name of Gonpo. It was great to get his perspective on the Tibet issue and hear about his life and ambitions. It was Gonpo that made our trip most special. 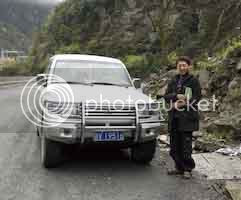 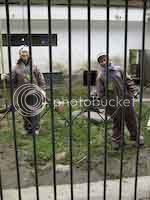 We drove out to Wollong National Reserve and saw the giant panda's there. We had already seen pandas in Chengdu but at Wollong, you can join as volunteer staff and help look after the pandas. Now this wasn't as exciting as it first sounded. Basically, we got to clean out their enclosures. We didn't even get to feed them. But it was still interesting to get a glimpse of life as a panda keeper. To volunteer to clean up panda poop, it costs 250 yuan each. If you want to play with a teenage panda, it costs 1000 yuan. If you want to play with a baby panda, it costs 5000 yuan!

The Wollong Hotel was unheated and it was very cold. Even the restaurant didn't have heat. You have to eat fast before all the oil in the dishes congeals. Each room had a rattling electric heater to wheeze out some warmth. However, the beds had electric blankets and thick comforters. It's the first time I've ever slept under an electric blanket. Fabulous! I think I'm going to buy one for chilly UK winters.

We then drove up to Songpan in about six hours enjoying the gradual demise of industrial landscapes in favour of rural valleys full of apple tree's coming into blossom and people tending their vegetable plots. Vegetables are grown anywhere there is a patch of dirt. Tibetan villages cropped up more and more. As we got to Songpan, spring disappeared and we landed in winter. It was cold. 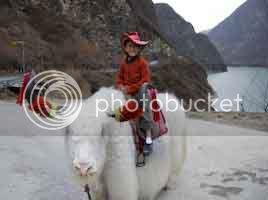 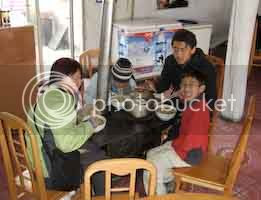 No one seems to be able to afford heating. Everyone gathers around coal-fired stoves in shops or the occasional electric heater. Luckily we knew we were in for cold weather and had been buying assorted warm clothes. 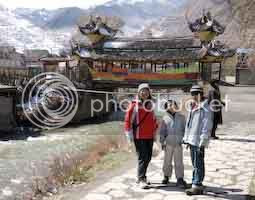 The next day we enjoyed a Western breakfast at Emma's Kitchen and spent the morning walking around Songpan. It was much less touristy than all the other places we've been. It's not very large but well worth a few hours stroll. In the afternoon, we slowly made our way to Jiuzhaigou stopping for pictures along the way. This included stopping at a Tibetan monastery and having a good look around. Yaks, goats, and horses are all road hazards along the way. It was a more picturesque and rural China that we had hoped to see. 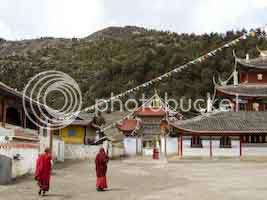 We got stopped by police for the third time on our way there. Gonpo displays a picture of a Tibetan Lama and a prayer book on his dashboard so with the ongoing Tibetan troubles, he gets targeted at any checkpoint. 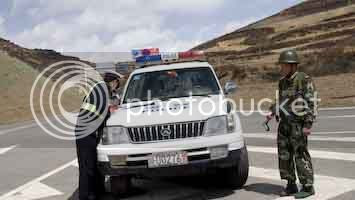 After our stays at unheated hotels, we splurged on the more upmarket Kangba Noble Manor taking a double bedroom suite. While the lobby and halls are unheated as usual, the room was warm and it had an excellent hot shower! Recommended.

We spent the following day with the herds of Chinese tourists hiking in the Jiuzhaigou scenic park. It's a series of azure lakes and tumbling streams in a mountain valley. It's pretty but nothing exceptional in April (Autumn would be fantastic). The kids had a great time playing in the snow at the top of the valley. For millions of nature starved Chinese visitors, it must be heavenly. Hiking is a bit of a misnomer. You take a bus between the sites and walk along wooden or stone pathways. You're not allowed off the path. In China, nature needs to be protected from the hordes of tourists. 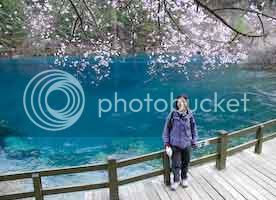 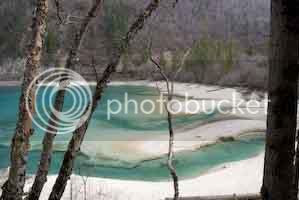 We covered the park in a day since there's a hefty fee for both the park entrance and the bus. We left the next day and tried to go to Huanglong, another scenic park, featuring a calcified terrace of water pools. However, we had to cross a mountain pass at 4000m that was covered in snow. Our 4x4 went into a low speed spin and hit the barrier in front of a very steep precipace. It made a few bad dents in the 4x4 but it didn't stop us moving on. We crawled carefully to the top of the mountain pass and after looking at the road down the other side, decided to play it safe and return to Songpan. 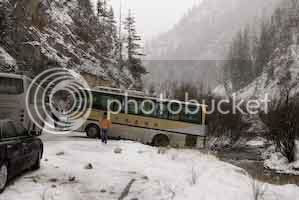 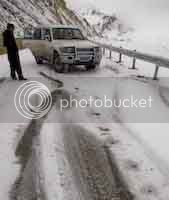 The government had closed off access to any towns to the west and snow prevented access to any other places we could visit near Songpan. We heard that police were even preventing buses from bring tourists to Songpan and the town felt half closed. We decided to end the trip a day early and drove back to Chengdu in 7.5 hours. The kids are taking these long drives really well. 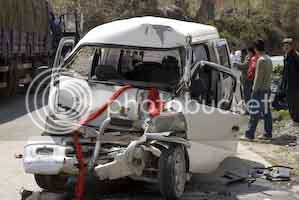 Driving is manic in China and we saw the sad results of one accident. Cars weave all over the road in any lane and near misses are common. I held my breathe on many occasions!