There's an excellent article in today's Independent by Henry Porter. The intro blurb is:

In the guise of fighting terrorism and maintaining public order, Tony Blair's Government has quietly and systematically taken power from Parliament and the British people. The author charts a nine-year assault on civil liberties that reveals the danger of trading freedom for security - and must have Churchill spinning in his grave.

For example, here's an interesting extract:

"For instance, the law banning people from demonstrating within one kilometre of Parliament is contained in the Serious Organised Crime and Police Act of 2005. The right to protest freely has been affected by the Terrorism Act of 2000, which allows police to stop and search people in a designated area - which can be anywhere - and by antisocial behaviour laws, which allow police to issue an order banning someone from a particular activity, waving a banner, for instance. If a person breaks that order, he or she risks a prison sentence of up to five years. Likewise, the Protection from Harassment Act of 1997 - designed to combat stalkers and campaigns of intimidation - is being used to control protest. A woman who sent two e-mails to a pharmaceutical company politely asking a member of the staff not to work with a company that did testing on animals was prosecuted for "repeated conduct" in sending an e-mail twice, which the Act defines as harassment."

And so it goes on. It gets worse. Your right to trial by jury doesn't apply in some cases. You can now be tried twice for the same offence. Hearsay is acceptable evidence for ASBO orders. Ministers now get complete control over goverment inquiries rather than Parliament.

If the Tories campaigned to address this imbalance, they might just get my vote in the next election.

Reforestation is not a Carbon Offset

Read an interesting lead article in New Internationalist (July, 2006) which highlighted some of the greenwash that's occuring when tree planting is sold as an effective carbon offset.

The problem is that burning fossil fuels permanently adds CO2 to the carbon cycle while carbon storage in trees is strictly temporary. In the long run, it doesn't help. These scheme's also tend to fund mono-culture mega-plantations and exacerbate local land disputes. Or sometimes, the planted tree's just die in poorly run scheme's. More info at SinksWatch and FERN.

So if you do buy into carbon offsets, check where your funds really are going. For example, 20% of funds given to Climate Care goes to a reforestation project in Uganda.

A Woman And Her Shed 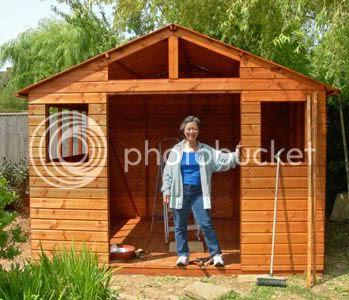 So this has been our latest project - well, Jenny's project. I'm just the forced labour. In our never-ending search for space, she wants to clear out the garage for her stuff by putting the stuff that's there into this new shed. It's about three times the size of our old shed.

If you're interested, it's a 10'x10' "Waltons Groundsman Workshop" from Garden Buildings Direct. Quality-wise, it's so-so but it was pretty cheap. The panels are flimsy. I've warned the children not to play "Three Little Pigs" inside since they might blow it down. We need to cover the floor with plywood to make sure a heavy object doesn't fall and break it.

Jenny can now join that great British institution of "Men and Sheds":

Hmmm. Maybe I should get my own shed? His 'n' her sheds! Out of interest, I checked the building regulations. No planning permission is needed if:


Hey! I could build a log cabin at the bottom of the garden! 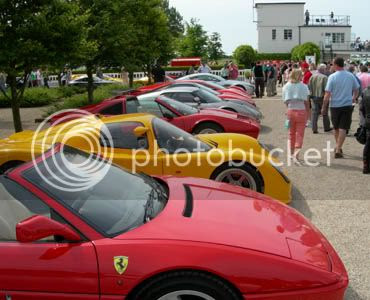 I feel guilty. I worry about climate change but I like fast CO2 spewing cars too. It gives me angst attacks.

A group of us zipped down in our sporty cars last Sunday morning to the Goodwood Motor Circuit to participate in the Goodwood Breakfast Club. The theme this month was supercars. The idea is simple. If you arrive at the circuit and your car belong to the month's theme, you park in the viewing area outside the cafe. If your car doesn't fit the theme, you park with everyone else. Our friend driving a Lotus Espirit got to park in the supercar area. The two of us driving Porsche's had to go with the rest of the punters.

The event is completely free if you don't count the £12 for a full English breakfast. There's a van selling bacon rolls too.

Lots of people show up driving plenty of exotic cars. There was every kind of Ferrari from very old right up to an Enzo. Lots of Lambo's. Even a Pantera. A few Cobra's. A Viper and a Noble. In the picture, you can see a yellow Ultima. One of a few that were there. I've been doing a little research about what it takes to build one of these beauties. There were a few Aston Martins and Porsches but they were mostly excluded. However, there were two (two!) of the latest Porsche Carrera GT's. Gorgeous. There was even the DeLorean from the film "Back To The Future".

Wandering around the regular parking lot can also be fascinating. Plenty of Caterhams, Elises and Porsches. Various kit cars and classic cars too. A Radical was there. So was an Ariel Atom (0-60 in 2.91 seconds). As we left, a thunderous Harley Davidson Motorcycle Club arrived. It's just a great day to watch people arrive and leave.

If I ever start doing a lot of commuting again, I'm quite sure I'll have to give up the Porsche and go for a two car solution: something practical that gets many miles per gallon and something else that's strictly for weekend fun. That will help keep the angst down.

So far, a personal carbon quota system is the best idea I've heard for managing carbon dioxide emissions. It's also refered to as Domestic Tradable Quotas (DTQs) or Tradeable Energy Quotas (TEQs) or Personal Carbon Allowance (PCA). Think of it as a personal pollution allowance/quota/ration.

The idea is you get a fixed number of units per year recorded on a plastic card. Units get debited when you buy goods or services. You can argue about the details but assume everything has a money price and a carbon price. The carbon units are a currency in their own right that can be bought, sold, earned and traded. Of course it won't be perfect and there will be a huge black market but it's the best mechanism I've heard of for creating a CO2 bound economy that leaves consumers with the greatest choice.

There are better descriptions of this on the net like Feasta Review, BBC News or TEQs.

I think it would be a more dynamic approach than carbon taxes which are a more blunt way of suppressing polluting activities. A personal quota provides a direct way of encouraging and rewarding green actions. You could even make money selling surplus carbon units. But it also allows you limited indulgence in polluting luxuries without raising the cost of them in "old" money.

Some will argue that such a scheme is too complex to run. Maybe. Maybe not. It depends on the details. I think it's worth pursuing further.

Panorama is a superb British news show. The latest broadcast exposed how the Bush administration has systematically suppressed scientific evidence of climate change over the last several years. Worth watching and you can view it online now.

It's just tragic waiting for how much worse it's going to get before real action will take place.