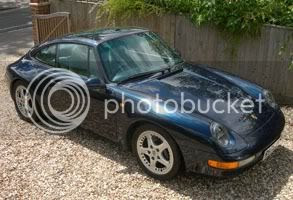 I'm very sad to say that I sold my Porsche. It was driven away last Wednesday leaving a big empty space in my driveway.

It was harder than I thought to let it go and teetered on calling off the sale. But I had to be practical about it. The problem is that with us travelling, I wouldn't be using it for a 10 months and would  have had to put it into storage for at least 7 of those months. Now, storage isn't good for a car anway but it costs £30 per week if you want them to start the engine and look after it properly. I've owned it for five and a half years and in that time, its depreciated £8800 which works out to £131/month. Put them together and the bottom line is that it costs about £250 every month to not use it.

On top of that, I have to say the kids had outgrown the back seats and didn't like riding in the car. And I admit I was driving it less often to avoid those £60 visits to the petrol station. It had become more of a weekend car.

But it was a great weekend car! Always a pleasure to drive it.

Our kids don't get a weekly allowance. You might think this is mean but I believe money needs to be earned in some way rather than just handed out.

First, we don't pay for chores around the house. That leads to the question "How much will I get?" whenever you ask them to do something. If they ask me that, I tell them how much they owe me for renting their room. The kids live in the house so they have an obligation to share in the domestic chores they're capable of. No arguments.

I will sometimes offer to pay them for a job that they aren't normally involved with such as washing the car or picking weeds. Its usually something outside to get them out of the house. Or I might pay them to do something like making greeting cards. If they can save me money, they can keep the money that's saved.

They don't get paid to practice their musical instruments. That's a commitment they made when they decided to learn them.

The kids go to "work" five days a week learning at school. I pay for results at school. At the moment, I pay for every sticker they receive when they've done a good job on an assignment or test. The tricky part is to come up with some quantitative and fair system that encourages them to put in extra effort.

I don't pay cash. We have an account book and I act like a bank. It's a generous bank that pays 1% interest on their accounts every month. It encourages them to save and shows them how money grows. Some day I'll teach them that interest rates change! I'm also an ATM machine.

If they want to buy something that I think is a good idea, I might offer to split the cost 50/50 with them. We negotiate all kinds of bargains and often require the kids to "sell" to us why we should share costs. The core idea here is that they must contribute some of their hard earned money. Clothes and books are an exception. We buy those. If we go to a fair or amusement park, I'll give them a budget and after they've spent that, they have to use their own money.

Sometimes they want to buy something that I would rather they didn't. I'll tell them why its a waste of money but after that, I usually bite my tongue. At that point, it's their money and they've earned the right to spend it as they wish.

This system has worked very well for us. The kids don't nag us for stuff and are careful with how they spend their money.

Tags: Parenting
Posted by Ian at 12:36 No comments:

Email ThisBlogThis!Share to TwitterShare to FacebookShare to Pinterest
Labels: BrainNoodles

This year we came up with a point system to limit the amount of time the kids played games on the computer and get them to do more educational things. I've written up the details in an article called A Point System for Earning Computer Time.

Overall, it's worked very well. I would encourage parents to come up with their own system so that kids earn the privilege of playing on the computer rather than give them unfettered access. I'm not against playing games on the computer but rather believe kids should indulge in a wide variety of play with a strong preference for the real world.

This point system doesn't have to be just for computer time. I think of it as an alternative currency and you can invent other things they can spend the points on. My golden rule is that there is no exchange rate between points and real money. I also never deduct points as punishment as that would destroy trust in the system.

Email ThisBlogThis!Share to TwitterShare to FacebookShare to Pinterest
Labels: BrainNoodles

BrainNoodles goes On The Road

Welcome to my new weblog skin. It marks the start of our travels as next week we head off to Canada to visit family and friends in Victoria and Vancouver. Our itinerary is also more or less settled for the rest of year and is still a bit hazy for the first half of 2008. Not that we're completely ready. Far from it! There's just so much stuff to do when you decide to go travelling for a year.

I'm not going to give you a blow-by-blow listing of our plans but will try to blog more frequently and tell you what we get up to. Stay tuned.

How to skim for a world record

Ran across this interesting info (that all fathers should know) over on 10ticks:

At present the world record for skimming a stone is set at 38 bounces. French scientists from the Institute de Recherche sur les Phenomenes hors Equilibre have studied the art of skimming. A throw involves four factors- the translational and spin velocities, the angle at which the stone heads for the water and the angle at which it hits the water surface. To get near the world record, Christophe Clanet, the head of the team recommends the angle to approach the water is about 20 degrees, spinning at 14 times per second and with a starting speed of 25 mph. Jerdone Coleman-McGhee is the world record holder and passes on these tips: Triangular stones skip best, circular stones are less stable. The lower your hand at release the better. Strength is not the key, quickness is. The faster the stone is spinning the better it will skip. The surface of the stone should be parallel to the water when it hits to achieve maximum bounce. The very finest skipping stones are flat black slate.

Tags: Parenting
Posted by Ian at 21:07 No comments: