We're been in Chengdu for a few days now. Right from the trip in from the airport, it's obvious that Chengdu is a richer city than Xi'an. There are forests of new apartment blocks sprouting everywhere. Construction appears frantic here. There's also landscaping and attempts to make the place look nice which lacked in Xi'an. The downtown core is larger and more modern. There are poorer neighbourhoods and places we were told to avoid.

We were greeted at the airport by our driver and guide as the first four days of our trip was a private tour. They took us to our hotel in the Tibetan quarter where we were greeted with a police blockade and a few dozen police cars. They're parked a few to each block with their lights flashing. The area is heavily patrolled. 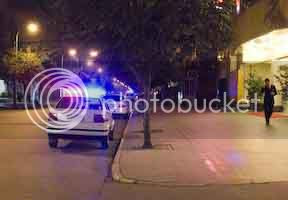 It's clear the authorities have taken the Tibetan riots very seriously. Travel to Western Sichuan is closed and there's no chance of going to Lhasa. It's been interesting watching the Chinese English-language news station. The rioters are simply branded as criminals and the Dalai Lama is blamed. There's is no mention of what motives or grievances there could be beyond labelling them secessionists. The main news websites like the BBC, CNN, Google and Yahoo are all blocked.

I don't support the violence in Tibet against the Chinese but do believe there should be a better political process. We've eaten at a couple of Tibetan restaurants and we're still staying in the Tibetan quarter as our token support. I must say I don't think I'll order yak butter tea again!

We've been to some temples on Qingcheng Shan, a holy Taoist mountain, and walked around the Dujiangyan Irrigation Project. In the 3rd century BC, Li Bing came up with this grand irrigation scheme which massively improved agricultural productivity in Sichuan. This filled the royal coffers and enabled Emperor Qin to unite China and build his terracotta army. It's more interesting than it sounds and is an important UNESCO site. 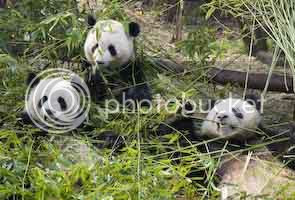 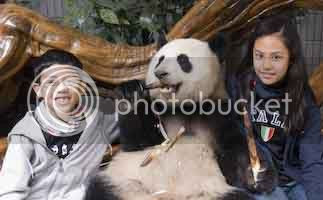 We went to the Giant Panda Research Base where I took pictures of the kids with a young panda. You have to get there early before the panda's all fall comatose after their bamboo breakfast. Afterwards we went to the Sanxingdui Museum which chronicles some quite amazing artifacts from the rarely mentioned ancient Shu Dynasty. 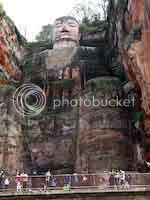 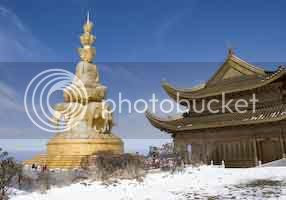 We did an overnight trip to the ancient town of Huanglongxi and Leshan to see the world's largest Buddha and climbed up Mount Emei. Huanglongxi was a tourist trap and Leshan was underwhelming but Mount Emei was good. We took the easy route which just involves 3km of walking up steps and then a cable car ride to the top. We lucked out with the weather. It was sunny and we had fantastic views all the way to the mountains of Western Sichuan and Tibet. The top was still covered with snow. For the first time, it felt like we were breathing fresh air! 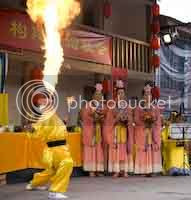 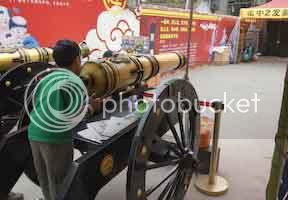 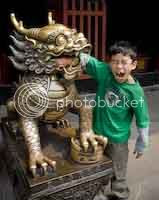 With the private tour over, we're now hanging about at Holly's Hostel in Chengdu touring local sights and deciding what to do next. While as badly polluted as other Chinese cities, Chengdu has its pleasant spots.