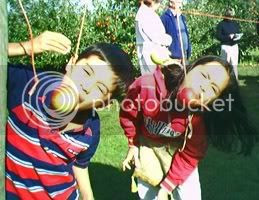 Yesterday we dropped by the annual Orchard Open Day at Cross Lanes Fruit Farm in Mapledurham (just north of Reading). The kids tried the traditional apple peeler, saw the displays on apple growing and bee keeping, tasted lots of apples and had a go at the games. We also tagged along on a tour of the orchard by the owner, Gill Franklin, who is obviously very passionate about apples (trivia: the Romans introduced apples to England).

What makes Cross Lanes special is that they grow 60 different obscure British apple varieties (and some pears and plums) and take tremendous care to get the greatest flavour from them. It's a bastion of good practice and does its best to help keep local production alive.

Each apple variety peaks at a different time and are usually on sale for just a few weeks. The rolling harvest means that the apple season is stretched out from  August to December and then that's the end. There's no gassing of the apples and putting them in storage for 10 months. These apples aren't covered with pesticide residues and are truly flavourful.

The kids tried a dozen varities and settled on a bag of Red Devils that they're now taking to school. Next month, I'll have to remember to pick up a bag of Jesters when Cross Lanes show up at the local farmers' market.